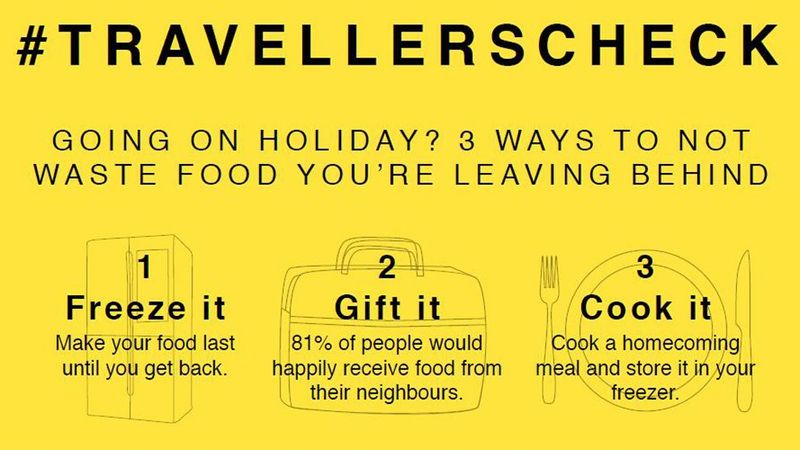 New research conducted by Unilever and Hubbub reveals that in the first week of the summer break, £12 million worth of food will be thrown in the bin as families head off on holiday.

Environmental charity Hubbub, in partnership with Unilever, commissioned a survey of over 2,000 people across the UK and found 59% of people admitted to throwing away perfectly edible food before they went on holiday.

45% of people said they threw food away because it couldn’t be frozen, but many weren’t actually aware which foods can be frozen – 58% didn’t realise you can freeze milk, 62% ham and 63% hard cheese.

In total, over £ ½ billion worth of perfectly edible food is thrown away in the UK each year when people head off on holiday.

Trewin Restorick, CEO of Hubbub said: “We need to wave goodbye to holiday food waste. Let’s value our food more, consider the energy and resources used to produce and transport food and do everything we can to avoid putting it in the bin. Travellers check your fridge!”

Charlotte Carroll, Sustainability Director, Unilever UK said: “We’re encouraging people heading off on their summer holidays to freeze it, gift it or cook it. In other words, use up the food you have already bought, freeze what you can and when you’re locking up the house and putting your bins out, knock on your neighbour’s door and share whatever’s left.”

Helen White from Love Food Hate Waste, WRAP, said: “WRAP welcomes these fascinating new insights. What particularly struck me was the widespread willingness of people to receive food from their neighbours, which sheds new light on something we could all do to help to reduce food waste!”

Unilever and Hubbub are launching a series of seasonal campaigns to inspire households across the nation to value their food and love their leftovers. Upcoming campaigns will focus on key seasonal events and provide tasty recipe ideas from Unilever’s brands including Hellmann’s, Knorr, and Wall’s as well as clever solutions to make your food go further.

The campaign falls within Unilever’s broader commitment to address food waste in the UK. This is outlined in the company’s Joint Ambition for a Zero Food Waste Britain. Developed with Hubbub, the document outlines five principles to tackling food waste and is supported by over twenty organisations. Tackling food waste is something which cannot be achieved alone, which is why Unilever aims to take collective action with other businesses, charities and the government to drive lasting transformational change.