Wall’s, Save the Children and Symrise are partnering with vanilla farmers and young people in Madagascar to build a better future

Vanilla has been described as the ‘Queen of Spices’. Its importance as an ingredient for ice cream makers such as Unilever, chocolatiers, drinks manufacturers and perfume houses around the world has seen its price per kilo rival the price of silver, gold and saffron.

The fruit of a rare edible orchid, vanilla was brought to Madagascar from its native Mexico more than a century ago by explorers. They were hoping to take advantage of the island’s climate to develop the crop as an agricultural staple.

Today, the country remains one of only four areas in the world where natural vanilla is grown and is responsible for 80% of the world’s supply.

A crop as valuable as silver

Growing vanilla is a long process. Each plant takes four years before it bears fruit. It flowers just at the start of the rainy season and then only for a few hours before it withers and dies.

The bees and hummingbirds that pollinated vanilla in Mexico are not native to Madagascar; instead, each flowering plant is fertilised by hand using a feather or a bamboo stick. Skilled workers can get through 1,000 flowers each morning. Then the waiting game for achieving a good harvest begins.

When droughts or cyclones hit the island hard – and they frequently do – they hit the livelihoods of farmers harder because they rarely diversify their crops. Why plant rice when you can plant a crop that can is worth almost as much as gold?

But when harvests fail and there’s no other source of income to fall back on, an entire population finds itself in deep hardship. It’s one of the reasons Madagascar is one of the poorest countries in the world. 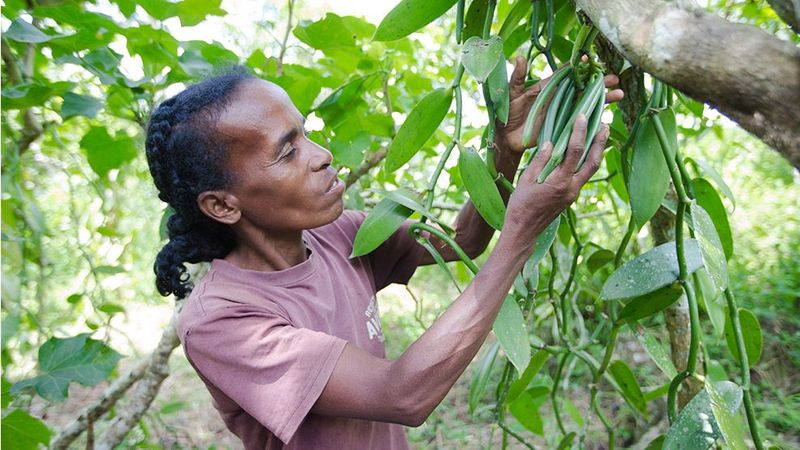 Modestine works in her vanilla farm in the Sava region of Madagascar. Credit: Save the Children / Charlie Forgham-Bailey

Since 2013 Unilever has been working with partners on a programme called Vanilla for Change in Madagascar. It’s designed to help smallholder farmers improve their livelihoods and provide Wall’s ice cream with more secure and sustainable sources of natural vanilla. One of them is leading flavour manufacturer Symrise.

In the first three years of the programme, nearly 3,000 farmers were trained in farming methods which helped them increase vanilla production by 20%. They were also encouraged to cultivate other crops and buy livestock. For many, this has reduced the ‘lean’ season, when there is no income from vanilla, from five to three months.

To pass these improvements on to the next generation, three rural colleges have been established where 160 young people (aged between 15 and 23 years old and almost 40% women) have been taught literacy, numeracy, finance and farming practices.

Alongside this, 200 primary school teachers and 77 primary schools have been given financial assistance to cover a proportion of children’s school fees and teachers’ salaries.

Save the Children joined Unilever and Symrise in 2016 to increase the scale and impact of the programme. Its global expertise in addressing the underlying causes of poverty has shaped the programme so that children have the best possible chance of fulfilling their potential.

This has seen vulnerable households gain access to interest-free rice loans to fall back on in times of need. It’s increased awareness of the importance of children’s health and nutrition. And it has delivered this at scale in Madagascar, with more than 40,000 people across 9,000 households in 76 villages receiving lifesaving health insurance, financial education and training opportunities for young people. 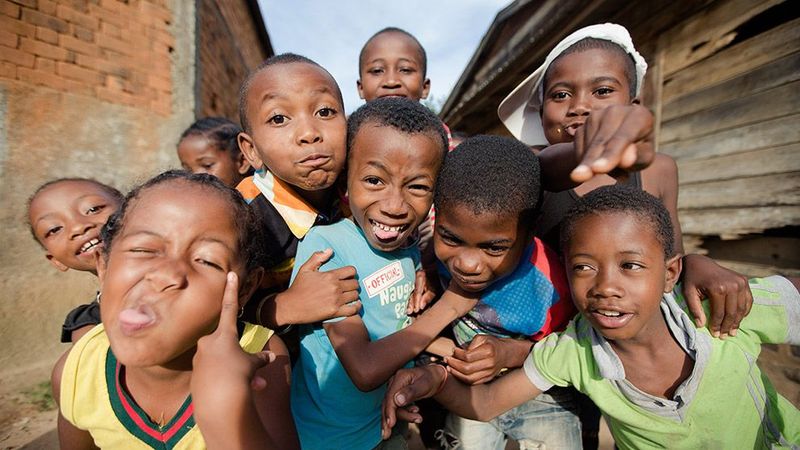 Iotsiny, 7, Richelo, 3 and Preta, 8 (L-R) laugh and play to camera in the Sava region of Madagascar. Over 40% of children under five here suffer from stunting, and the country has the world’s fifth-highest number of out-of-school children in the world. The Vanilla for Change partnership aims to break the cycle of poverty and support these children in building a brighter future. Credit: Save the Children / Charlie Forgham-Bailey

Vanilla for Change: how you can make an impact

The partnership is also working with social enterprise ‘Me to We’ to enlist the help of very important stakeholders – you, the consumers who enjoy and buy our ice creams.

‘Me to We’ uses QR codes for consumers to track their impact and use their purchases to add to a good cause. During the Vanilla for Change campaign, consumers in the UK who buy one of Wall’s selected ice cream products (Cornetto Strawberry, Cornetto Classico, Calippo Combo Vanilla Strawberry and Solero Exotic) will be able to see how they are supporting initiatives in Madagascar and in the UK.

“Vanilla for Change is the first step to demonstrate our commitment to fairness across our supply chain,” adds Ian Maskell, Global Vice President, Wall’s Ice Cream. “It’s a beautiful chapter of the journey we embarked on as a brand to make a difference to the lives of the communities we serve, through our purpose of building a happier, more inclusive world – one street at a time.”

So the next time you’re tempted by an ice cream on a warm sunny day, take your time. Enjoy the taste of an ingredient that is sustaining and empowering a community for the future.

Banner image: Tansmanie, 6, in her village in the Sava region of Madagascar. Credit: Save the Children / Hanna Adcock

All photos in the associated social media slideshow are credited to Save the Children.

From Me to We